The number of shares and votes in BICO Group AB (publ) have increased as a result of a directed share issue of 6,408,626 shares of series B which was carried out Sartorius AG. The Board of Directors resolved on the directed share issue on December 8, 2022 pursuant to the authorization granted by the annual general meeting held on April 26, 2022. The Swedish Companies Registration Office has during the month of December registered the new shares of series B.

This information is information that BICO Group is obliged to make public pursuant to the Financial Instruments Trading Act. The information was submitted for publication at 2022-12-30 08:00 CET.

About BICO
BICO is a leading provider of life science solutions and laboratory automation that enable more efficient development of new treatments with more specificity and less need for animal testing.

The company uses bioconvergence as its operating system, combining advanced technologies with biology to streamline and automate workflows within the pharmaceutical and biopharma industries.

With 32,000+ instruments installed in over 65 countries, BICO products and solutions are found in more than 3,500 laboratories, including the world’s top 20 pharmaceutical companies, and have been cited in over 11,000 publications.

Operating through three business areas – Bioprinting, Biosciences and Bioautomation – the BICO Group strives towards the long-term ambition of enabling the reduction the world’s organ shortage and speeding up drug development to create the future of life-saving treatments.

BICO is listed on Large-Cap, Nasdaq Stockholm under BICO. www.bico.com 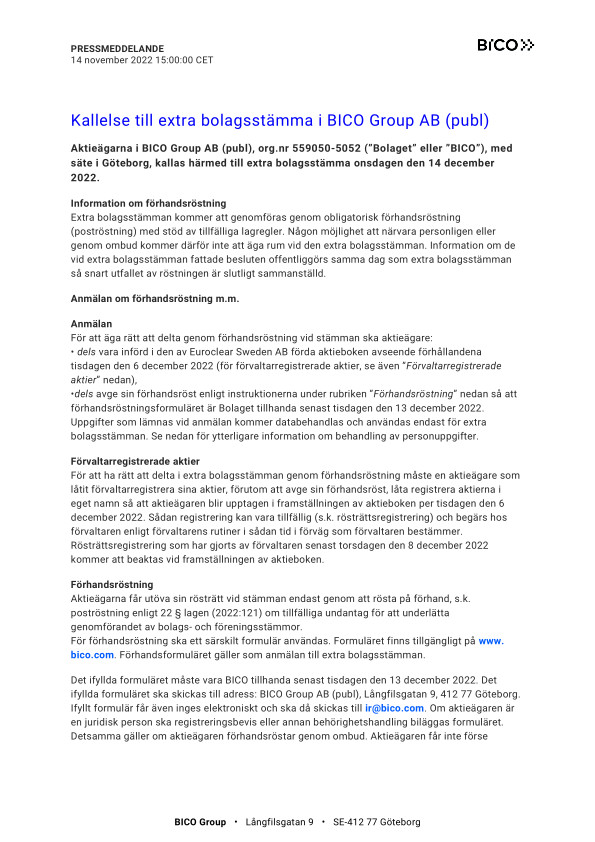